when your day begins with a mysteriously open trunk and a missing $300 BOB stroller, you lose a little bit of faith in humanity. And perhaps you didn't have much to begin with or maybe you did. If it's the latter, then you're in luck because all you need is a renewed commitment to locking your car doors each night and a few lovely encounters with pleasant and kind strangers during another aimless trip to target. a starbucks in your hand can only improve your chances of a brighter day and all of this with an 18 month old, talkative, lovable, little boy, well, it can do wonders for the soul. it'll cheer you right up, restore a bit of that faith, that hope that not everyone is horrible and selfish and thoughtless.

so, to the thieves who came in the night, got lucky with an unlocked car in its own private driveway, i applaud your daring efforts, your baby gear savvy, and the generosity of leaving behind the ergo, my jacket, and the 3/4 empty pack of boogie wipes.

also, fuck you.
Posted by vickichristine at 28.2.14 6 comments: Links to this post

i stay up really late paying bills and doing other randomness. i will usually get very hungry at some point, probably around 11pm. so then i will eat some chocolate, which will make me want a tuna sandwich. and then some popcorn. lots of water will follow and then i'll close my laptop and go to bed happy.

confessions of a pregnant lady.

we moved to this house in a bit of a whirlwind. we closed escrow in about 20 days, found that most of our old furniture just didn't fit - we have a garage FULL of furniture, need any?? - and even though i didn't know it at the time, i was already pregnant with baby 2.

it all seemed really overwhelming to me. add in the holiday madness and just call me a useless, crabby, unmotivated, possibly depressed person.

until i realized that i wasn't dying and was in fact, pregnant, after only one period since getting knocked up with the rivster, i was kind of a sad mac. grouchy, crying, sickly, tired exhausted. all the usual early pregnancy indicators, ya know. but i never even thought! silliness, i say.

so yeah, one strong line and one faint line later i was like...woah! that totally makes sense now!

i'm smart. did you know this about me?

now that i am in the 5th month, i'm finally starting to feel like this is real again. i've even been feeling some mild movement from my new cellmate.


hello little jumpy bean! hope it's super fun in there. i've been eating enough sweets to ensure you have an addiction later in life. i do apologize but ya know, cravings are just demanding. don't watch commercials when you grow up because they are entirely convincing and compelling and before you know it, you're in the car heading to another fast food joint to try their latest dollar burger. it's. madness.

or beef jerky from target. you'll want that too after watching diners, drive-ins, and dives - so maybe skip that show too.

i'm right though, right? commercials were definitely intended for children and pregnant women. our impulse control is weak, weak, weak.

today, i drove to where i thought daphnes was because i neeeeeeded a gyro for lunch. but when i got there, it was not daphnes, it was rubios. i cried in my car and then called hank to let him know that he won the lunch race and we were getting jersey mike's instead because i was too starving to drive across town to where yelp told me daphnes actually was. it sorta ruined my sunday.

luckily, the original italian sub, hot off the grill is kinda bomb from jersey mike's so there ya go - the silver lining.

i'm such an optimist.

love you guys - if you're still out there. also, if you can't tell i wrote this in two parts so it feels a little disjointed but i can't fix that at midnight. my apologies. also! we sold a shit ton of shit this weekend on craigslist, i mean, killlllled it on craigslist. this means our garage is nice and clean and emptier.

xo
Posted by vickichristine at 16.2.14 6 comments: Links to this post 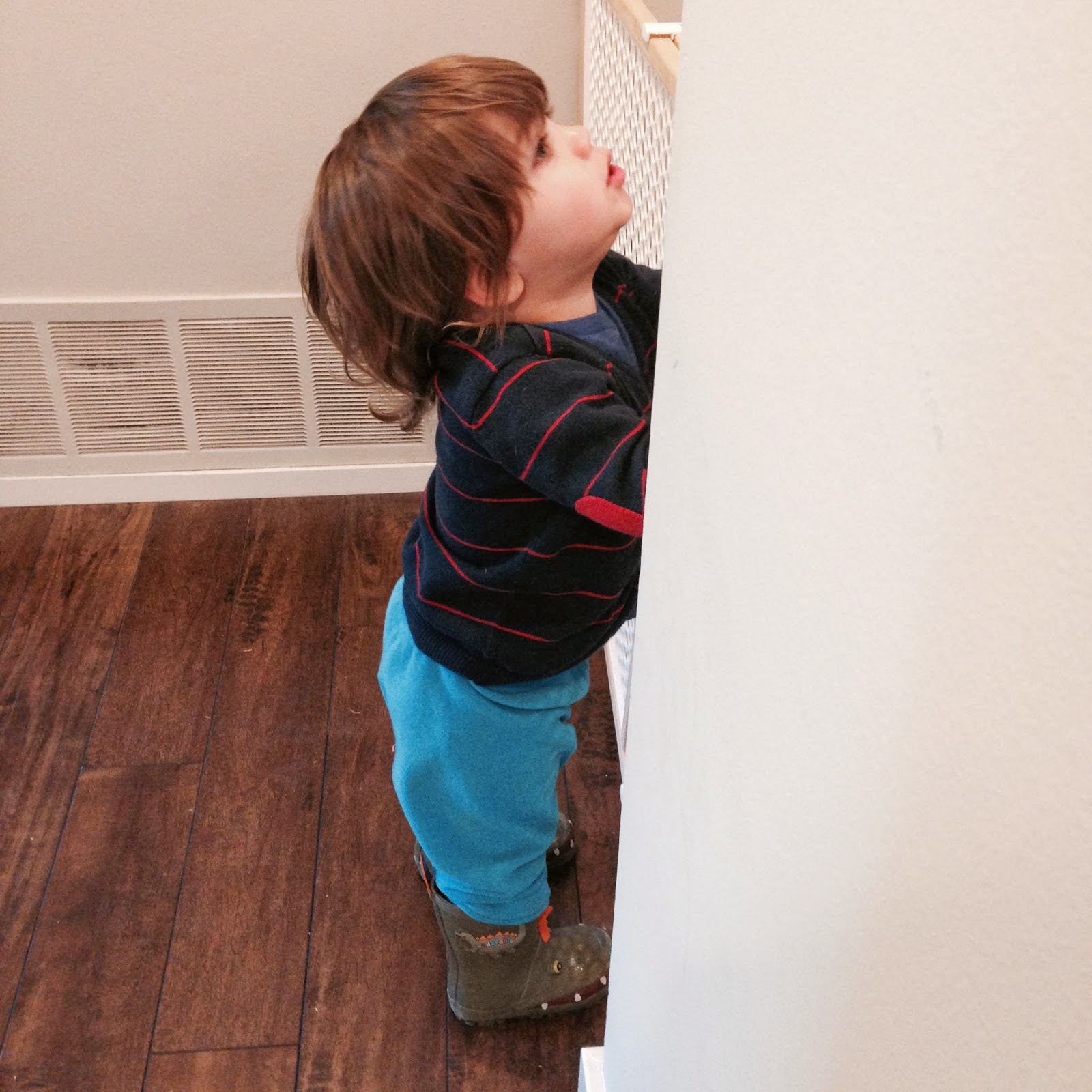 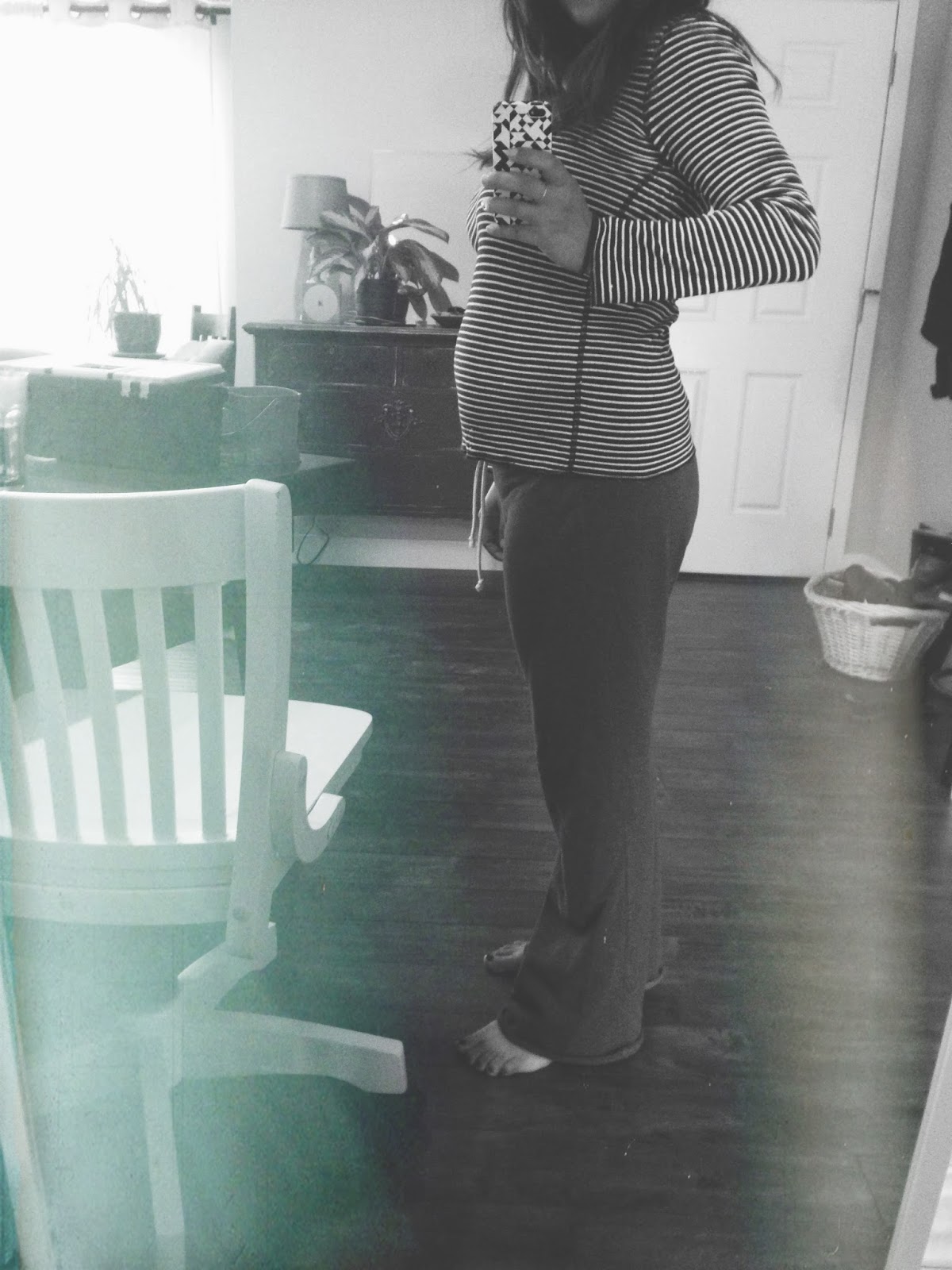 river: standard saturday morning wear, i'd say. rain boots for tromping through the wet morning grass in the backyard, warm sweats from the night before, and the first sweater i can find before he's running past me to the outside chill. he's a rascal, full of energy. here, he's talking to his dad up in the attic, basically asking if he can climb the ladder again. the answer is always: no, no, no, no.

baby: hey, look! another photo in my pajamas. lucky you! .... 15 weeks. had an appt today, measuring right on schedule. feeling pretty good lately, no sickness and energy is back up. second trimester, you get me.