every morning, before i start making coffee, i set up river's play area in the living room. i lay out some pillows and a blanket, and choose a few toys that i think he might enjoy. sometimes he likes them and plays independently for a while, sometimes he just follows me to the coffee maker and wants to be held or entertained.

today, though, i did something different.

i laid out a blanket and then i pulled his toy basket to the living room and took nothing out myself. i let him choose the toys he wanted to play with on his own. i also set up a pile of books, that i usually keep organized for reading time, and gave him access to those as well.

and all morning, he's been going back and forth between his toy basket and books, playing/eating with each one as he chooses. it's pretty incredible.

i'd have to say that's the best part of this stage right now. his new mobility and independence is so fun to watch. he'll sit on the floor, look around, maybe scream a little, and then he'll decide which way to go. and when he gets there, he is so happy and proud. and then he's off to explore some other part of the room.

he'll always end up back at my feet. pulling himself up on my legs until he's standing and patting me so that i'll pick him up.

i'm glad i'm still the best toy in the house. 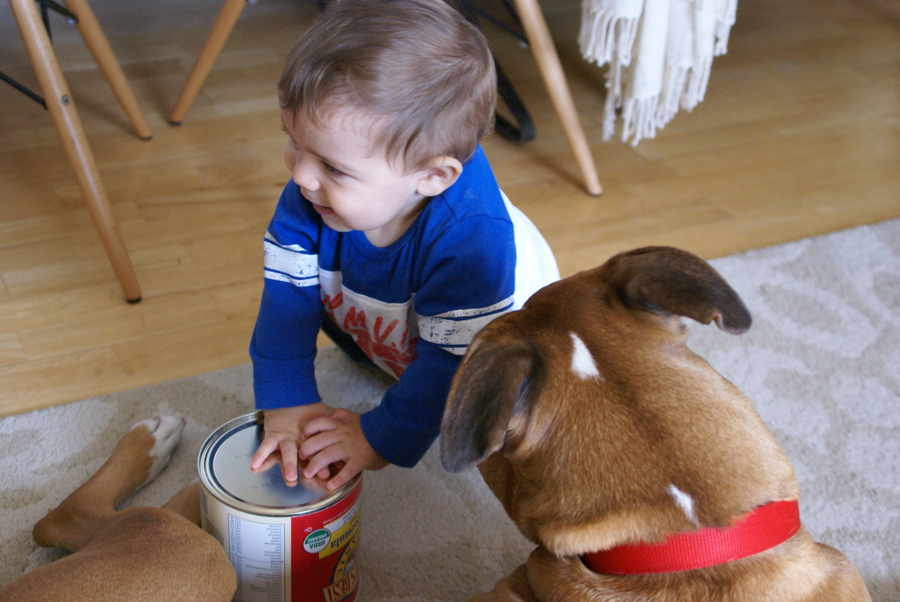 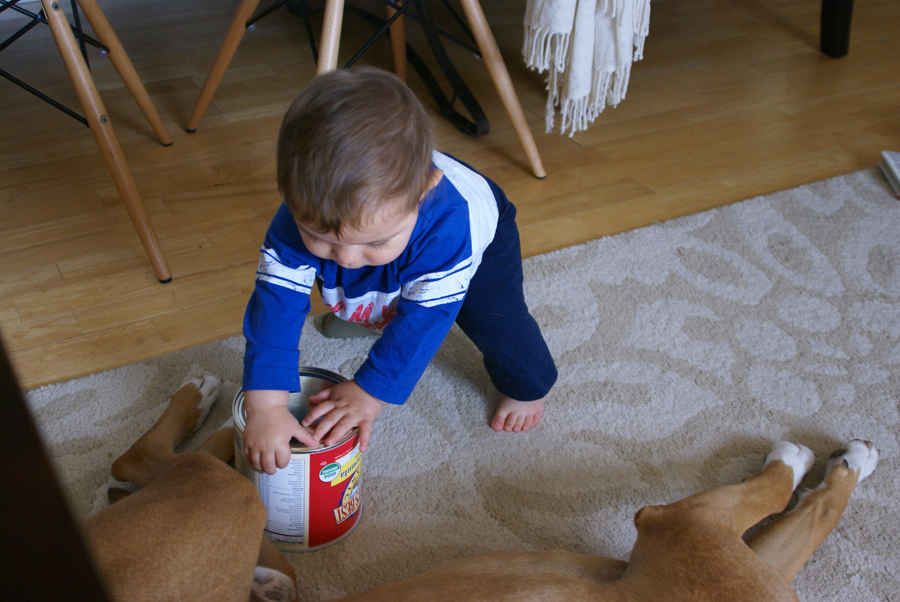 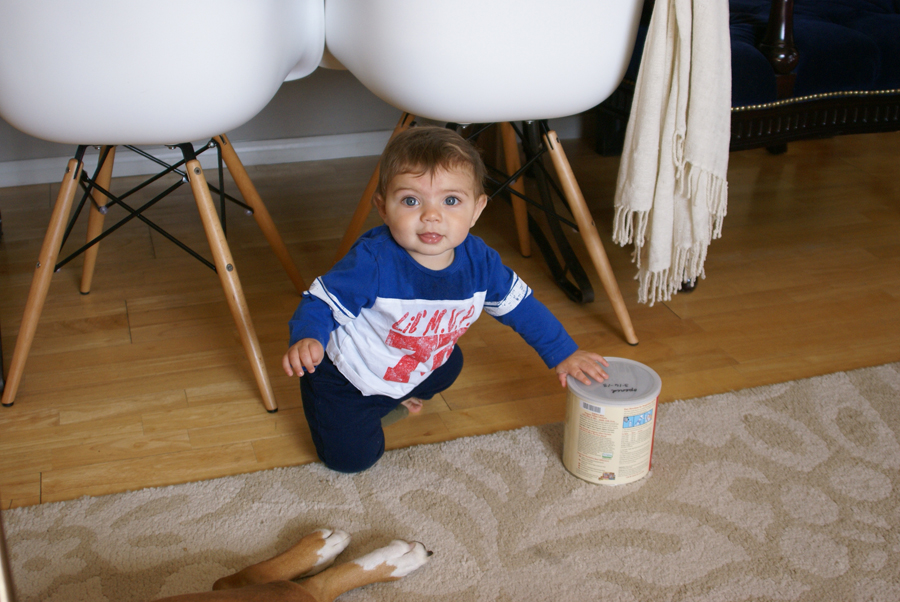 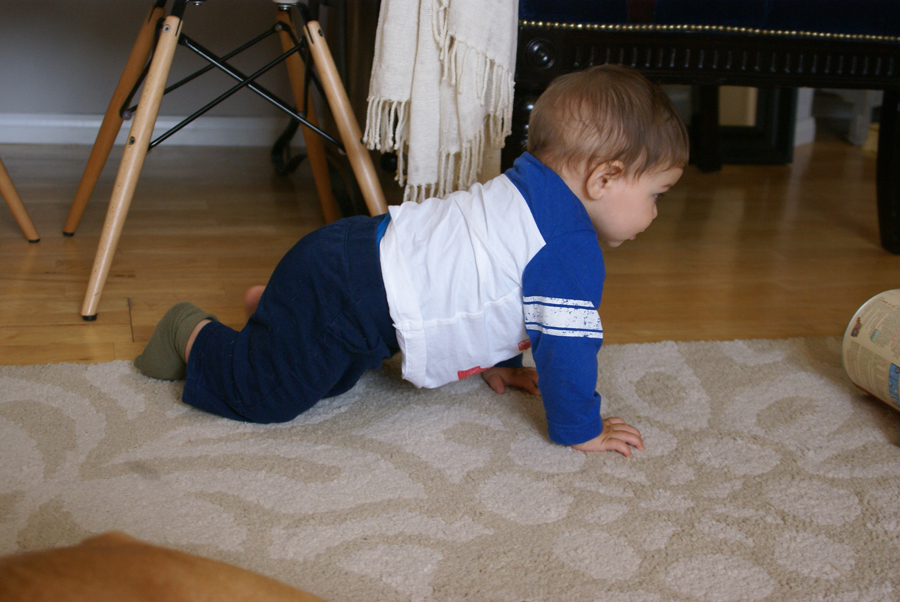 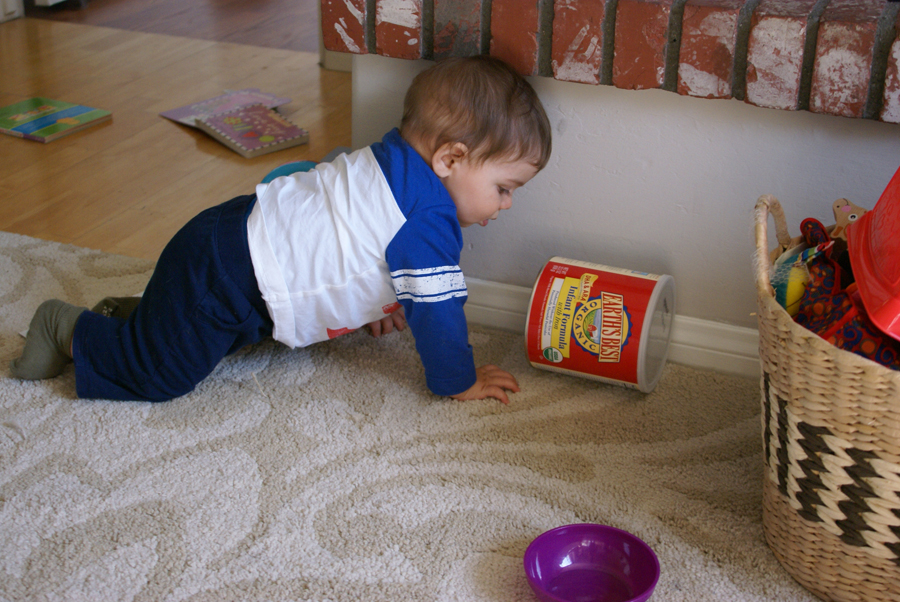 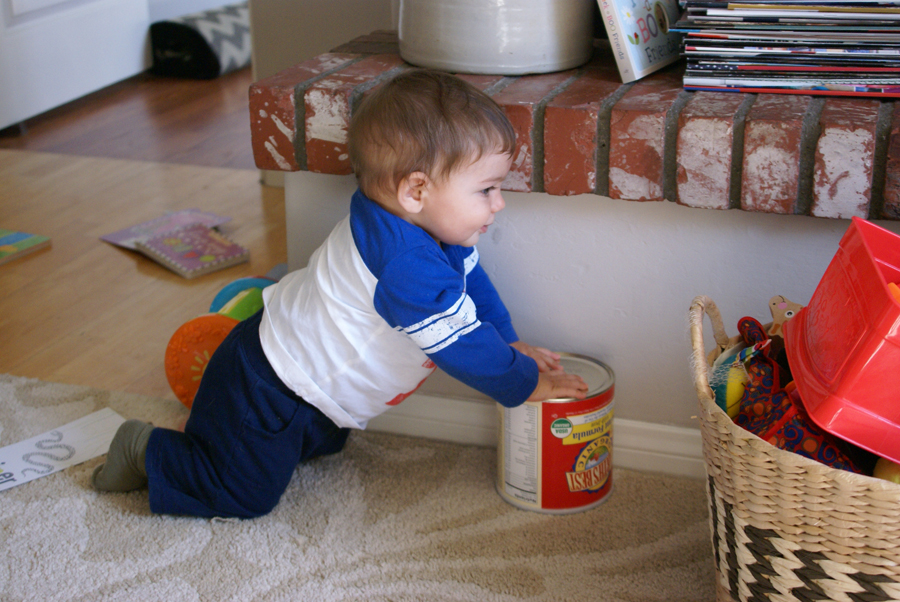 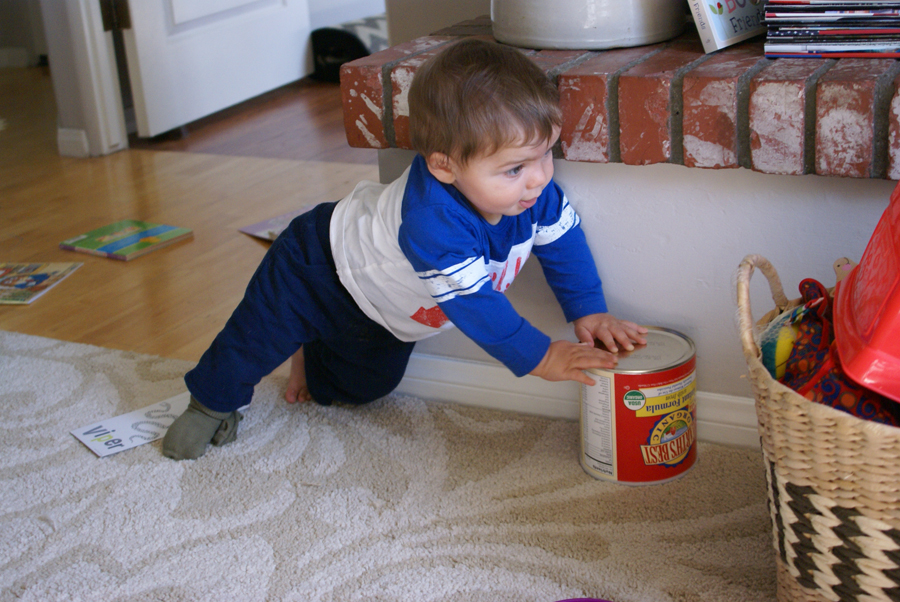 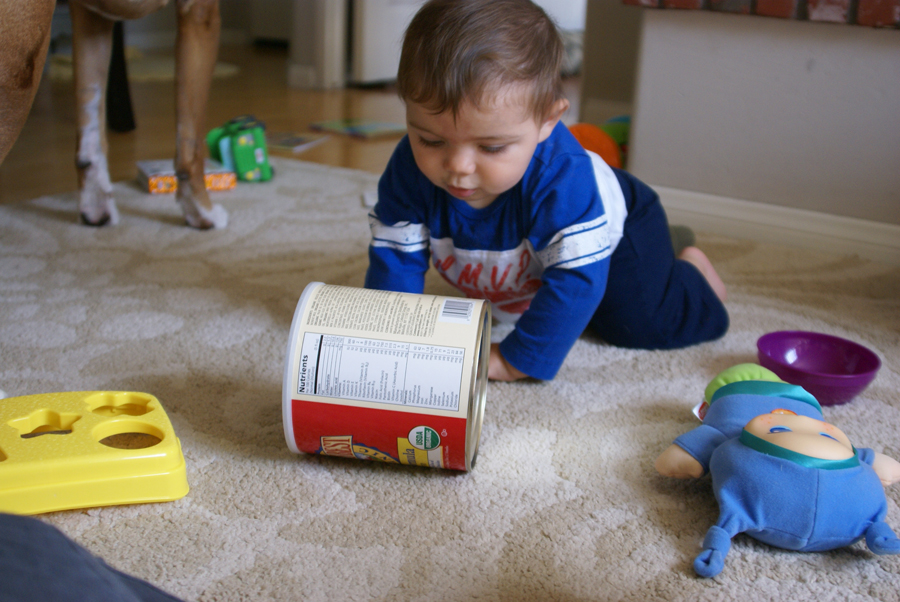 always, with one sock on and one sock off.
Posted by vickichristine at 26.4.13 8 comments: Links to this post

and over in the living room...


remember that time i thought i'd give "ready for love" a shot because i used to like the bachelor but then grew to hate it so maybe i could tolerate this one in its infancy. i mean, it's supposed to be sooo much better than that trashy bachelor show, said someone named guiliana rancic. psh. lies.

i even recorded it so that i could devote real life time out of my day to watch and revel in the love. but no, i just stopped and erased because i promise you, i was about to throw up my 72% dark chocolate pieces from trader joe's all over my white couch.

thank goodness for remote controls. or clickers, if that's what you call 'em.

ugh, and now the news is on because it's the 11 o'clock hour and i deplore the news. it's so ugly, right?

down with the news. down with dating shows.

Posted by vickichristine at 10.4.13 9 comments: Links to this post

the initial days of feeding river real food was so exciting. we took about a million photos of his first cereal and then of his first pureed veggie. i had also read the baby led weaning cookbook and was looking forward to letting him explore food on his own.

both hank and i turned into parents and started freaking out about the possibility of him choking on anything and everything. and through our smiles and "yays" we're quietly biting our inside lip and holding our breath waiting for his mouth to open again for more, because that meant it all went down as it should have and he's still alive and thank you, food jesus.

this mostly happens when we're out at a restaurant and start to feed him off our plates because his whining got just a little too loud as we tried to find his jar of peas in the diaper bag. so to pacify, we grab the biggest chunk of whatever for his little hands to hold and let him go to town.

but it also happens at home. like the time i gave him a half peeled banana and he started eating the peel instead of the banana. ditto with avocados. and then i gave him an orange and remembered how i'd gagged/choked on many an orange in my day and freaked out and pulled it out of his mouth only to leave him crying and begging for more.

feeding him food isn't as exciting as it used to be.

i've never had my fingers in anyone's mouth as much in my life. we read about the baby gag reflex, which is closer to the middle of the tongue vs. the back/danger area but still, to see it is something else. poof! we're overprotective parents!

and is it just me, or is it super hard to fit real meals into the day? who knew nursing was so damn easy. i mean, i knew, but man, leave it to regular food eating to remind ya of how it easy it can be to sit and whip out a boob instead.

so we're slowly werkin' it out in the solids department.
wish us luck or send us a hug.

Posted by vickichristine at 4.4.13 3 comments: Links to this post 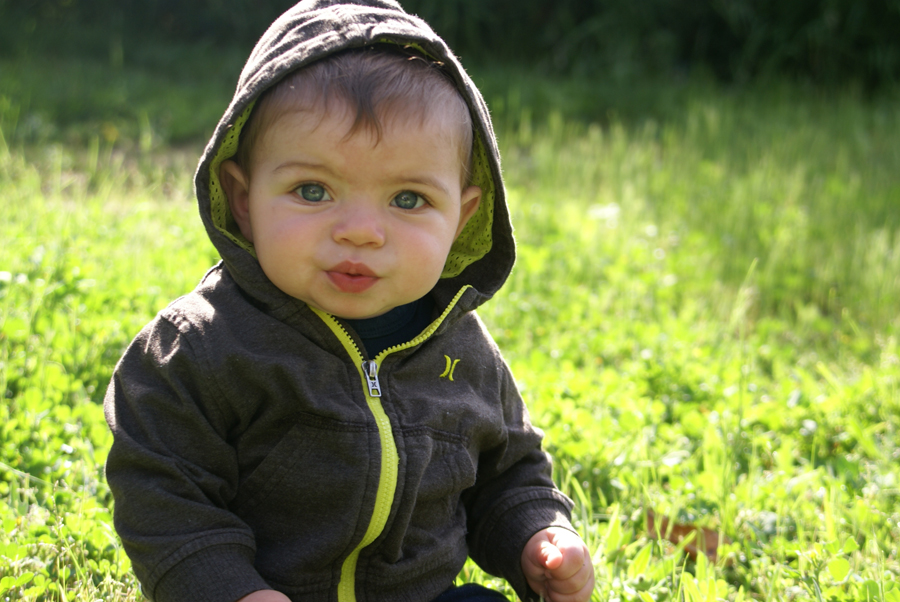 i had to move one of my house plants today. it was the second thing river went for this morning. all it takes is one hanging leaf and that pot of dirt would have been all over his head. instead i caught it just in time and now it lives on a higher shelf in my entryway.

the first thing he grabbed was brian's guitar. it was the loud noise that alerted me to the situation. i'm guessing loud messes will be the first to be rectified as we learn our way through baby mobility. it will be the quiet ones that i'll find hours later when i accidentally step in it or decide to walk on that side of the kitchen island for once.

as difficult as i imagine this new stage will be, i'm kinda loving it. i actually had to look for him this morning. he was trying to crawl into easton's bed. but how fun is that?? he's a curious little george just ready to get into some serious trouble and it's the cutest. which reminds me, i should probably dig out those socket plugs i bought a while back.

new things, may they never end.

Posted by vickichristine at 3.4.13 8 comments: Links to this post 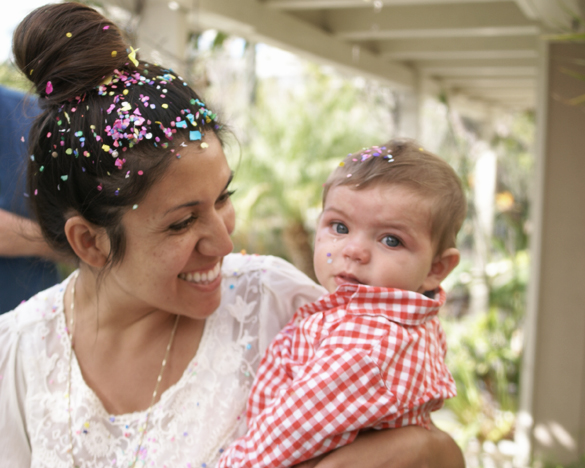 we had a great time at my mom's house with the family. poor riv has been teething so he was a bit of a cranky bunny but was still able to partake in the fun of confetti egg madness. lucky kid! he also got to watch us play mexican train dominos. have you played this? such an easy, fun game - we've been playing it for years in my family and yesterday, we introduced 3 newbies to the game, including river. oh, the things he'll learn.

eggs and games aside, i did want to let you all know that i've decided to take a break from sponsorships right now. i realize that i haven't been blogging consistently and while i try, i feel like that's the type of blog that can really help everyone through sponsorships and so, i'm closing 'er down for a bit.

i am striving to blog more and who knows, they may come back another day but for now, i'm cleaning house a little and simplifying this space. i do hope you'll still come and check in on us once in a while. or every day, ya know, just in case. ;)

i've also heard that google reader is going away?? is this true? eek!

xo times a million.
and a happy april to you all!

thank you so much to everyone who has swapped ads with me in the past. i've really appreciated it.


Posted by vickichristine at 1.4.13 3 comments: Links to this post