a river runs through us: a birth story


remember that one day i slathered plaster all over my naked torso?

well, i’m no expert but i think said action is a sure-fire way to kick labor into gear because mid-slathering, contractions started happening. at first, i thought, woah, i just felt a short period cramp. it was your standard period cramp, warm, twisty and achy. nbd. and then maybe 10 minutes later i felt another one and wondered if i was making it up in my head. did i want to get baby out so bad that i started imagining labor pains? are these even labor pains? you mean, i will actually go into labor at some point??

i sent a text to my co-pregnant pal asking at what point do i start timing these things. she said to just start and so i did.

this was wednesday at 7pm.

i loved the feeling. warm, tingly crampage knocking at my cervical door, saying let me out, let me out. i sat on the couch, chatted with my mom about how it was feeling while hank was at his weekly hockey game.  i was getting increasingly excited for what would come. my mom went home and told me to call her when we were going to leave the house. hank came home and sent his boss an email saying he wouldn’t be in for work the next day. it was getting real, folks.

when midnight came around that night, we decided to go to bed and just wait for the contractions to get stronger. i slept through the night almost completely. two or three times, i woke up from the pain, went to the bathroom and then fell back asleep. it was a calm scene.

the next morning, my contractions started to become more consistent and from thursday morning on, they were never less than 10 minutes apart. and as the day went on, they grew in intensity and i thought, we should pack the hospital bag. ha! procrastinate much?

so we packed the bag, i bounced around on an exercise ball, we watched ridiculousness and laughed through the pain. but i had a goal, whether it was time or not, to drive south to my sister’s house to be closer to the hospital and to miss rush hour traffic. (we live about 40 miles from the hospital since moving) so when 2:30pm rolled around, we left. by this time, it’s pretty intense and i expect to be a mommy by that evening. i sat in the passenger seat with a car seat in the back, hank’s hand on mine, and my requested john mayer playing loud from the stereo. i breathed through each “cramp” and sang songs during the in-between minutes.

one thing to know about labor, contractions are almost delightful in the early stages because you know it will end soon. you know that in a minute or so you’ll feel completely normal again. you’ll breathe normally and carry on a conversation, close your eyes and rest. knowing that there is light after each contraction is heaven. sleepy, happy heaven.

we park at my sister’s house and i slowwwwwly waddle through the pain to her front door. it’s getting worse. walking is difficult. laying down is NOT happening. sitting, sitting up is all i can do; it’s my preferred position. i totally thought i’d be able to lie down and rest or sprawl over the exercise ball but no, no, no. the pain is practically unbearable in those comfy positions. it’s upright or nothin’. so i keep changing my seat up. i’m on the couch, a chair, the ball, a different chair. i’m hot, i’m cold. it’s too loud, it’s not loud enough. i want my back rubbed, i don’t want to be touched. it was a lot of back and forth, searching for the thing that would help me through it.

i decided things were brutal enough. contractions were consistently 4 minutes apart and i wasn’t waiting for 3 minute mark. i had to be close to ready because back labor had begun and silent tears were rolling down my face. we packed up and made our way over.

we checked into the birthing center and found out that my midwife is on duty. hooray! they move me into one of the biggest rooms there, a second hooray!, and i change into the infamous hospital gown. my midwife comes in and hugs me. i’m so ready. i’ve been doing this for more than 24 hours at this point and can’t believe the moment is so close.

she checks me and says:

ok, so you’re only about 4 centimeters dilated. it’s still pretty early but we’ll let you stay. get comfy, it could be a while.

it took me a month to really fall in love with my little river man. of course, i instinctually loved him when he was born. i loved that first cry and that first look and that first latch. but it's all so new and overwhelming and, and, and.

those first few weeks were hard. we were getting to know each other. he, new to the world. me, new to his world. because it is now, it's all his world and i am here to guide and help and comfort him along the way. and lucky, lucky me.

it took a month.

and now, here we are at almost 6 weeks and i am completely, utterly, most undeniably in love with that boy. i miss him when he's sleeping. i can't wait to nurse him again and again. i soak in every new move and face he makes.

and i know that it will continue to grow, this bond we're forming, because that's how life works. change is always good, even if it takes time to give into it. it's all about time and effort and love. that's all we can do; that's all we get to do. to give it our best shot each day and to let those around us know how much we love them, how much we appreciate them, how special they are to us.

and river, you are the cat's meow, kid.
you really are. 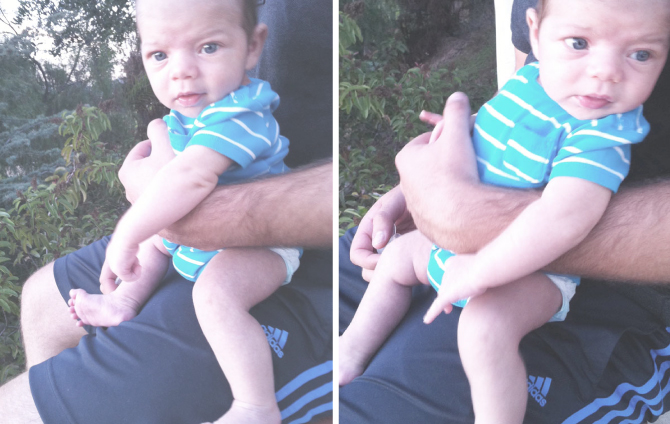 im sitting here pumping as i anxiously watch my child writhe and squirm in his sleeper. he's got gas. he's got it bad. it's only been 45 minutes since i last fed him and i can tell i only have a short amount of time to finish this up because he's going to be hungry again.


it's during these times that i miss the first few weeks of newborndom. the days when he literally ate and then slept for hours on end. i believe it happens like that to ease you into parenthood. to trick you into thinking it will always be that simple and systematic.

as the days go on, i can see that no days will be predictable. when yesterday, rocking worked, today, he hates the rocking chair. when last night he slept for 7 hours, tonight, he woke up every two just to make sure you were listening. it's a crazy baby world for this crazy baby momma who loves rules and order and predictable things.

eff is a common feeling for me these days.

reminds of yesterday when we were happily, peacefully in nursing land. baby eating like a fiend, mommy watching another boring television show when there was a crash. it was a crash from down below, a thunderous boom from diaperville. at first, i thought, great job buddy! but then, then i noticed my hand and thigh felt warm. too warm.

the biggest glob you've ever seen...or smelled...of yellow baby poo all OVER his clothes, his blanket, my pants, my hand. we walk slowly to the changing table to clean up the scene. well, once baby is laying down, his sock gets in the poo. so i take that off. well then his foot in the poo. and when it's time to remove the onesie, the poo transfers to his back and his hair.

hey riv, remember when you grew out of newborn diapers at 4 weeks? wah.

one month and two years 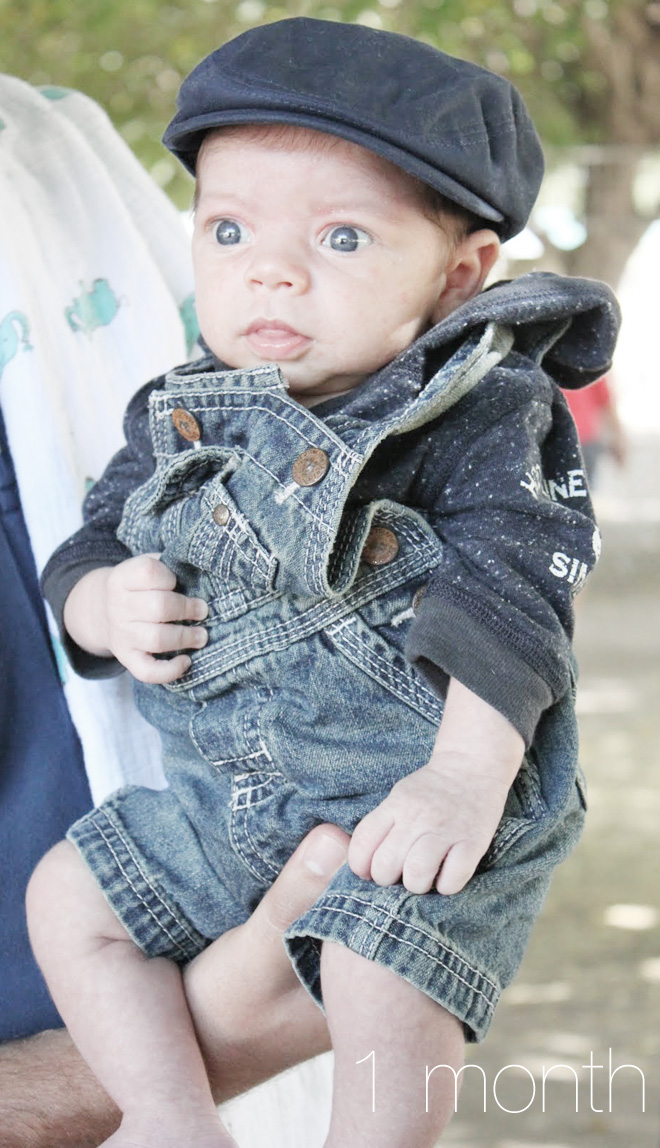 on monday, river celebrated his first month birthday. he partied it up by eating, pooping and sleeping the day away. he also smiled at me 10 times and enjoyed a decent amount of tummy time. his one month appointment was today and little riv is weighing in at 10 pounds. he's feeling mighty strong and capable these days. he even crawled up my chest and headbutted my chin to prove his strength. to which i said: show-off!

on monday, hank and i celebrated our 2 year wedding anniversary. we partied it up by going out to a fancy italian dinner on saturday. it was filled with delicious pastas, cheeses and wine. i had two whole glasses and yes, i was mildly intoxicated. it felt grand. river's gigi offered to watch him overnight that day. overnight, people! of course i did have to get up twice to pump because river's eating machines were about to explode without their best customer in the house. but man, it was a quiet, peaceful sleep we had. and even still...7am couldn't have come any sooner to go over and hold our little man. but back to wedding anniversaries. i am married to my most perfect partner. there is not a day that passes that i am not entirely grateful, happy, lucky, amazed, and fulfilled by this man. this hank. 2 years and about 100 more to go. i love you hanklin. big time.

good things.
xo
Posted by vickichristine at 9.10.12 17 comments: Links to this post

what to pack: hospital stay for baby day 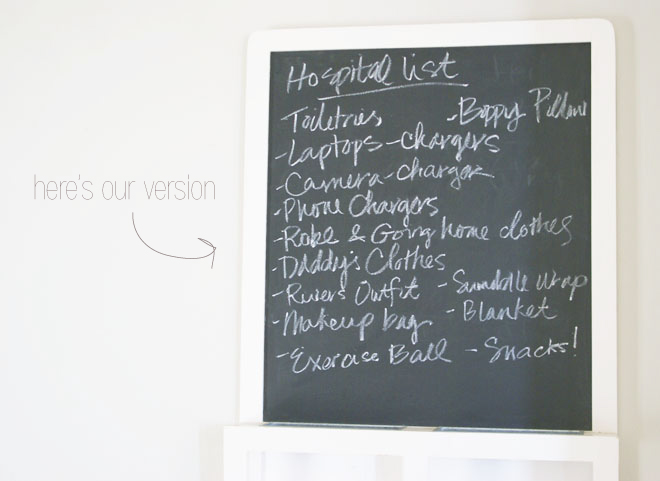 i wrote this list on a chalkboard in our kitchen so that regardless of when it had to be packed - the day we went to the hospital, as it turned out - hank knew exactly what to get. men like lists and i don't plan ahead. just in case you can't read my sloppy writing, here's the list again:

toiletries - for each of us. ex: toothbrush, face wash, deodorant, etc.
boppy pillow - breastfeeding helper, though the hospital has so many pillows, you'd be fine without this. though! hank slept on it as his pillow and fell in love with it. so if not for feeding, bring it for your hubby.
laptops and chargers - we only brought one and i never even touched it.
camera and charger - definite must have
phones and chargers - also definite - hello, you will need to instagram all the newest baby pics!
robe and going home clothes - i was really happy to have my own robe to walk the halls and to look a little more like myself when visitors were around. got a super comfy one from target.
river's outfit - i see many people bring more than one to dress the babe while you're in the hospital, we didn't do this so he was a naked swaddled baby most of the time - he didn't seem to mind.
makeup bag - i used my chapstick, blush and eyelash curler while there. though honestly, it didn't help much. ha.
exercise ball - hospitals probably have these around but i brought mine anyway and used it A LOT.
blanket - for baby's ride home
swaddle blanket - not necessary but cute to have with you so your baby is swaddled in something cuter than hospital blankets.
snacks - lots of them! hubby and you both are going to be hungry after the delivery and during the day(s) you are stuck in there. hank's version of snacks was a costco size bag of skittles, fyi.

there you have it. i honestly didn't need anything other than what's listed above. so good news: you don't have to stress about packing for the big day! easy peasy.

Posted by vickichristine at 3.10.12 10 comments: Links to this post