my goodness gracious. what awful things you can do when you have way too much time on your hands. indeed to that idle/devil hand theory.

i bought five too many movies at hollywood video because they got me with the buy 2, get 2 and then some additional percentageness off just to seal the deal. and with the abundance of time i found myself with this weekend, i watched two of them. two of the five that i had not seen.

exhibit a: the savages. this movie is listed here first because it proved less awful on the oh so awful meter and because i watched it first. (i'm a sucker for chronological order and that kind of jazz) consensus amongst the viewers i polled in my house this weekend (this includes myself, my hank and my new christmas tree, who i swear actually leaned away from the tube during this flick) is a whole lot of boredom and boredom. yes, twice the boredom for your viewing pleasure. i'm going to guess that it's due to my current age that i was not able to fully understand and appreciate the sentiment. siblings dealing with placing their estranged parent in a nursing home and watching him die...i see the bleak and the dire, i'm not just interested in watching a movie about it. it's three best attributes: philip. seymour. and hoffman.

exhibit b: the happening. this movie should have been called the not happening or the not going to happen or the never should happen that you watch the happening...something along those lines. because some of the actors in this movie have been in many others and have done so well, i am curious to know if they were instructed to do a shitty job. if they were downright told to act like a bunch of doohickeys to make the viewers hate them. if so, they are stellar at following instruction. i almost searched the cable guide to see if elf was on, yet again, to redeem zooey deschanel for my own personal relief. so yes, the movie blew, the acting blew and the fact that shyamalan's cameo was in the form of a name of some random dude on a cell phone for no reason makes me hate it even more.

where is the justice? i wonder if i can scratch the shit out of them and casually make an exchange for something else...
damn, i'm optimistic today.
Posted by vickichristine at 14.12.08 No comments: Links to this post

rationed reading
is death itself
can't seem to stray from this shelf
make it important, imperative too
i'm at my best
when right here with you
Posted by vickichristine at 1.12.08 No comments: Links to this post

if anyone ( ! ) ever claims to like this play, they are lying. if they're not lying, they have incredibly bad taste and should never be taken seriously.

mims and i were lucky enough to get in for free. and even so, we went with open minds and open hearts, starving for a much needed dose of culture and the arts.

my first thoughts were somewhere along the lines of: oh! so this is a comedy. but then the punch line never came and i saw that some parishioners seated down two pews (if i may) were crying. clearly, i was mistaken. and for a moment, i thought maybe i should cry too. indeed, i was in pain.

i did find specks of merit in a few chord progressions, and while these could not save the show, the soundtrack is its best asset. that said, please rethink that pat on that back you may be about to offer dear old andy lloyd...because he's no master. even phantom, which is his best effort, isn't all that snazzy.

and so, through the first half we persevered. and when that was over, we fought our instincts and decided not to leave during intermission. yet, another example of how important those gut feelings can be.

the second half was plagued with a serious case of the eye rolls and our versions of a henry restless leg encounter. until at last, act ii was at a close and ted neely was condemned by pontius pilate to stop his country/rock screaming tirade.

and i propose you spare yourself a show that tortures even it's characters. no need to get curious on that front.
Posted by vickichristine at 25.11.08 2 comments: Links to this post

a poem for the blind man


*this was later referred to as: a poem for nick.
Posted by vickichristine at 21.11.08 1 comment: Links to this post 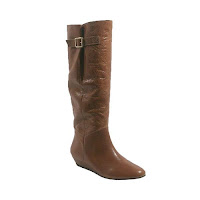 the constant search for self? nah.
the truth of the universe? nah.
the incessant disappointment i feel everyday at many a thing? nah.

i have been on a quest for the perfect pair of boots. for quite some time i believed i would never find them. i bought two pairs and returned them both, dissatisfied with their appearance in my own mirror.

but fear not boot lovers, i found them.

yes, last night, in my last ditch effort to find these elusive boots of mine, i visited the fashion valley mall. there, i entered the steve madden store. and immediately, i handed 3 styles of boot to the sales gal. size 8 please. i have to account for socks.

first pair. eh. hank said they were decent. second pair. love. i felt it right away. hank said yar! third pair, just to be sure. nah, not so much. hank said nevah!

and so, the second pair it was. hooray. if you see me on the street, tell me my boots are sweet. 'cause they is.

and then ask why i'm on the street. damnit.
Posted by vickichristine at 20.11.08 2 comments: Links to this post

ah, my most recent life and all that fills it.


truly, this time is a good time.

makes me want to sing. and i do. now if i can just get my piano and some guitar lessons. preferably by an inspired me.

and music, you ask? wellllll...

brett dennen
adele
julieta venegas
meiko
my morning jacket
the weepies
vanessa carlton (always)
jessie baylin
the dead
and way too many itunes purchases.
...much due to gerbtastic. spectacular music man that he is.

oh look, there's a glass of wine in front of me. guess that's the bell.
Posted by vickichristine at 14.11.08 2 comments: Links to this post

i got my obama|biden magnet last week.
i know, a little late in the game...

tomorrow is the day. c'mon america, don't let me down.
Posted by vickichristine at 3.11.08 No comments: Links to this post 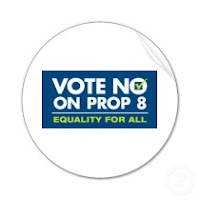 i find myself in constant search of enough. and in the blogosphere of blogs, enough means reason enough to write. to share my thoughts with you.

i'd been considering prop 8 and my detestation towards it. but i thought that those (if any) who read this blog would probably share my disdain and so onto the next possibility i moved.

but now, just now, on my way home from work, a block from my house, i saw 3 people (not 8) standing on the corner with signs that read: Honk if you love Prop 8! Prop 8 doesn't take away any rights!

i have so many words i don't even know where to begin.

can you picture them? what do they look like? are they angry? are they yelling at cars? are they wearing floor length frocks and holding up big wooden crosses?

i look at them, make eye contact with them and give them my best sad face and a big ol' thumbs down. they laugh and wave back at me. i shake my head in disgust. they tell their comrades to pay attention to me. now, i am the focus of all 3 (not 8) demonstrators. with my hand, i offer the sign of peace and drive past them.

and so, i was compelled to write here, to blog, about how prop 8 is deceptive and evil. about how it's supporters can wear happy faces and display sunshine colored signs. about how they are promoting segregation and fear. about how people waste so much time worrying about what others are doing. 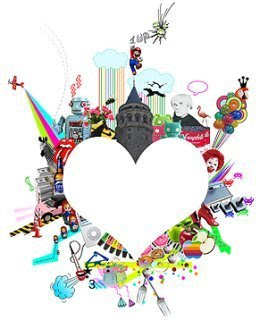 cosas. lots of them.
i made a vow to save money; then i picked up my Vogue magazine and all frugality went out the bedroom window.

cosas. lots of them.
i made a vow to only eat veggies and fruits; then i saw a coldstone and tried the new oatmeal cookie flavor. twice.

cosas. lots of them.
i made a vow to start watching my netflix dvds when they come and not 6 months later. thursday, i got season 1 of weeds; netflix should be receiving those tomorrow.

cosas. lots of them.
i made a vow to love football and kick some serious ass in my fantasy league this year. week 5 and i'm 37 points ahead. 5-0 smells good.

cosas. muchas.
Posted by vickichristine at 5.10.08 No comments: Links to this post

there's a fuchsia eye mask sleeping next to me.
there's a blue eye mask broken somewhere in here.
this may explain the lack of sleep.
may probably does.
ah well; i'll shut these eyes real tight.
goodnight.
Posted by vickichristine at 22.9.08 No comments: Links to this post